Hotel Teatro is located in a renovated landmark and is set in the heart of Denver, nicknamed locally as “LoDo,” or the Lower Downtown District.

From Trolleys to Theatre

In 1863, Denver’s Governor Evans built a brick cottage for his family at 14th and Arapahoe streets in Downtown Denver. The Evans family continued their quest to build up Denver by donating 4 blocks up Arapahoe Street, where they established the Denver Seminary. The Seminary moved to its University ParkCampus in the 1880s, and has since evolved into the University of Denver.

In 1911, two architects retained by Evans – William E. and Arthur A. Fisher– set out to design an eight-story office tower for the Denver Tramway Company and adjacent three-story car barn. The design combined modern construction and a traditional Renaissance Revival-style edifice of glazed red brick and white terra cotta. Marble trim and brass fixtures graced the 42,000-square-foot tower. The first-floor lobby led to the offices of the Treasurer and Train Master, while physicians and a legal department occupied the second floor. The eighth floor was inhabited by the president, whose boardroom was lined with oak and marble. 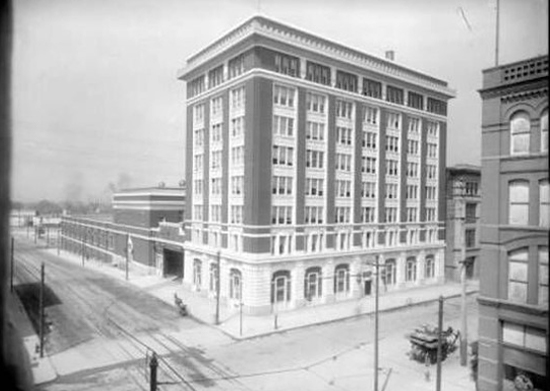 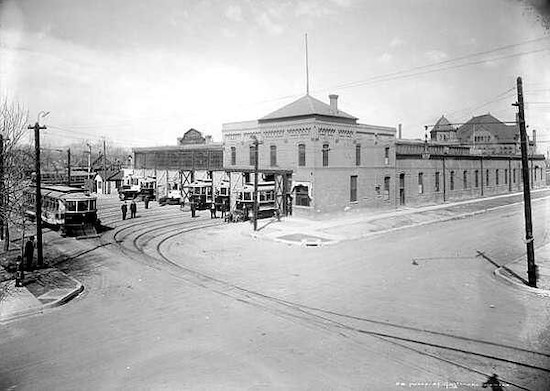 Much Denver history revolves around the Tramway building, which has been designated both a Denver and a National Registered Landmark. During the Tramway strike in 1920, the building became a fortress with armed guards on the roof protecting those housed inside. After the strike ended, management reinstated service in August 1920.

The Denver Tramway trolleys were in service in Downtown Denver from the 1880s until June 3, 1950. Too elegant and sturdy to be demolished, the Tramway offices were soon used by the University of Colorado at Denver.

The Tramway Building’s official “reincarnation” kicked off in 1994, when the building was purchased by the Tramway Hotel, LLC. With the assistance from a grant from the State Historical Fund, reconstruction began in 1997 to transform the Tramway building into a hotel. After a significant rehabilitation, the landmark reappeared in 1999 as the 110-room Hotel Teatro.

Hotel Teatro revamped its lobby and first-floor level in the summer of 2014, uniting with local designer Studio Frank to employ a rustic-yet-contemporary design scheme. After a successful run with Denver Master Chef Kevin Taylor, Hotel Teatro now boasts a full-service, on-site dining establishment, The Nickel. Our chef team aims to make all guests feel the fondness of familiarity within our doors – from friendly and knowledgeable service, to the warmth of the wood-fire oven to the comforting aromas of home coming out of the kitchen. Most recently, Hotel Teatro completed a full $2.5 million dollar guest room renovation including updated furniture, lighting and cabinetry. Hotel guests will still get the same great service and amenities they've learned to love at Denver's Original Boutique Hotel.

The Nickel takes its name after when, in the early 1900s, streetcars filled with people flocked to the city to enjoy the sights and sounds of everything taking place, able to access the vibrant downtown scene for just a nickel a ride. The restaurant is home to seasonal menus created with locally-sourced ingredients, house barrel-aged spirits, a coffee roasting program and, of course, the original vault that once collected the nickel fare from streetcar passengers.

Thank you! Your submission has been received!
Oops! Something went wrong while submitting the form.